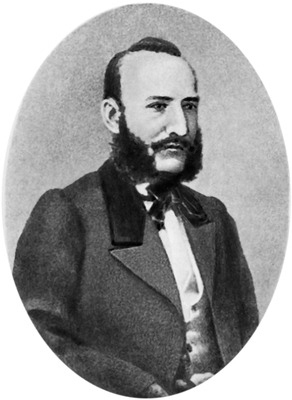 Alexander Nikolayevich Afanasyev (Afanasief, Afanasiev or Afanas'ev, Russian: Александр Николаевич Афанасьев) (23 July [O.S. 11 July] 1826 — 5 October [O.S. 23 September] 1871) was a Russian Slavist and ethnographer who published nearly 600 Russian fairy and folk tales, one of the largest collections of folklore in the world. The first edition of his collection was published in eight volumes from 1855 to 1867, earning him the reputation as being the Russian counterpart to the Brothers Grimm.

Alexander Afanasyev was born in the town of Boguchar in the Voronezh Governorate of the Russian Empire (modern-day Voronezh Oblast of Russia) into a family of modest means. His mother Varvara Mikhailovna Afanasyeva came from common people. Alexander was her seventh child; she became very ill after giving birth and died by the end of the year. The children were raised by their father Nikola…Read more on Wikipedia

Work of Alexander Afanasjev in the library